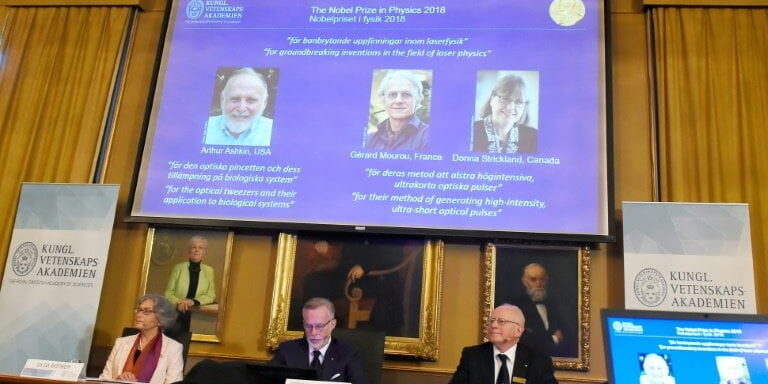 Three scientists on Tuesday won the Nobel Physics Prize, including the first woman to receive the prestigious award in 55 years, for inventing optical lasers that have paved the way for advanced precision instruments used in corrective eye surgery.

Arthur Ashkin of the United States won one half of the nine-million Swedish kronor (about $1.01 million or 870,000 euros) prize, while Gerard Mourou of France and Donna Strickland of Canada shared the other half.

Strickland is just the third woman to win a Nobel Physics Prize since it was first awarded in 1901, while Ashkin, 96, is the oldest person to win a Nobel, beating out American Leonid Hurwicz who was 90 when he won the 2007 Economics Prize.

Ashkin was honoured for his invention of “optical tweezers” that grab particles, atoms, viruses and other living cells with their laser beam fingers.

With this he was able to use the radiation pressure of light to move tiny objects, “an old dream of science fiction,” the Royal Swedish Academy of Sciences said.

A major breakthrough came in 1987 when Ashkin used the tweezers to capture living bacteria without harming them, the Academy noted.

According to Ian Musgrave of Britain’s Central Laser Facility, optical tweezers make it possible to use lasers to manipulate very small objects, such as beads of glass or oil droplets, to position them precisely or control the environment around them.

The tweezers can for example be used to “trap droplets from asthma inhalers to improve the efficiency of delivery through the lungs,” he said.

Ashkin made his discovery while working at AT&T Bell Laboratories from 1952 to 1991.

‘Most intense laser pulses ever’

Meanwhile Mourou, 74, and Strickland, 59, won for helping develop a method to generate ultra-short optical pulses, “the shortest and most intense laser pulses ever created by mankind,” the jury said.

Their technique is now used in corrective eye surgery, among other things.